A Devotee Should Be Simple

A devotee should be simple and clean dressed, but more than dress, the mind should be clean.

Vision of Krishna and His devotees

Krishna and pure devotees see through the substance, not the maya the world sees through.

Lord Caring For His Devotees 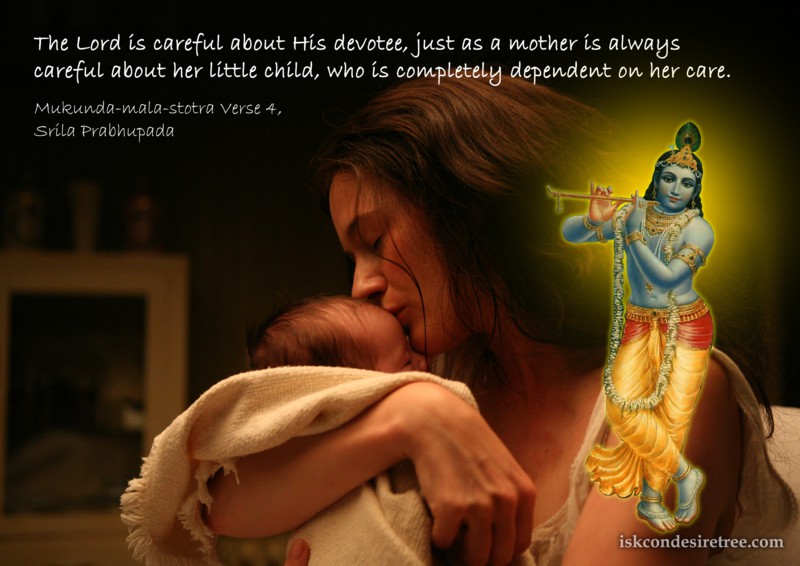 The Lord is careful about His devotee, just as a mother is always careful about her little child, who is completely dependent on her care.
Mukund Mala Stotra Verse 4
Srila Prabhupada

Devotees solely engaged in the devotional service of the Supreme Personality of Godhead, Narayana, never fear any condition of life. For them the heavenly  planets, liberation and the hellish planets are all the same, for such devotees are interested only in the service of the Lord.

Lord Chaitanya, however, has recommended only one yajna, or sacrifice, called the sankirtana-yajna, the chanting of Hare Krishna, in which everyone can take part. Thus both devotees and fruitive workers can derive equal benefit from the performances of sankirtana-yajna.
Purport on Srimad bhagavatam 1.16.20

In Jagannatha Puri Chaitanya Mahaprabhu’s only occupation was holding Sankirtana at least four hours every day and distributing prasadam to the devotees.